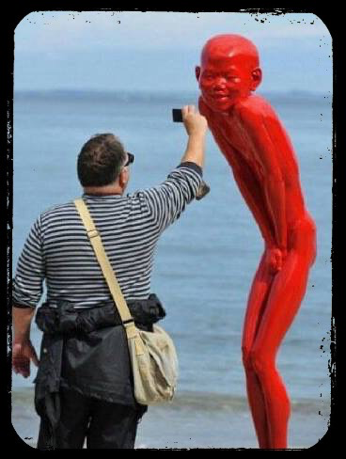 Flap Navel always dreamed of vacationing on planet Earth because, as an unattractive, middle-aged Ballwalladeen from the Fourth-Alternate-Universe-On-The-Left, he was so shockingly pink that his fellow Ballwalladeenians soundly shirked him. But when FN was given two weeks leave from his assembly line job working as a globular inflation specialist, he immediately trans-flickered to Miami Beach, Florida. Within a few hours, Mr. Navel had an adverse reaction to radiation from our nearby star but became an instant seaside celebrity. He quit his job and become a commercial model for Banana Boat Aloe After Sun Lotion Ultra. Mr. Navel married a nice girl vacationing from Sugar City, Colorado, and lived happily ever after.