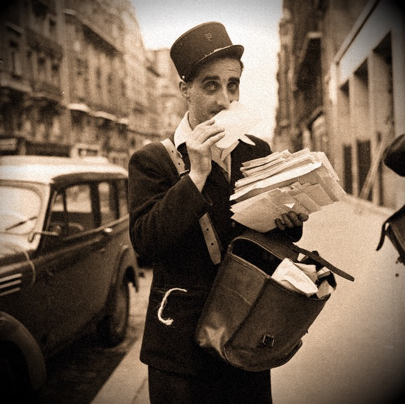 Jean Pierre Grandnez was the most renowned postman in all of Toulouse. His profound proboscis could pinpoint the emotions of the person posting each and every missive. He knew that Marie Laroche was blisteringly jealous when she broke off her engagement to Julian Fontaine; he knew that Chevalier Prideux had suffered years of self-reproach when he finally confessed to embezzling from his brokerage firm – but Jean’s most shocking discovery was when he delivered a note to himself! It was from Chiquita Sabaleta, a woman he had met on a 2-day snorkeling trip in Spain. The plain-looking Chiquita had a nose even larger than Jean’s and her simple Valentine exuded a yearning and understanding of Jean’s innermost needs more than any woman he had ever known. After a single whiff of her heart-shaped note Jean quit his job, walked to Seville Spain where he begged for Chiquita’s hand. They lived in loving bliss for forty-eight years – unfortunately, they both had short tongues and their pronounced noses kept them from adequately French kissing.