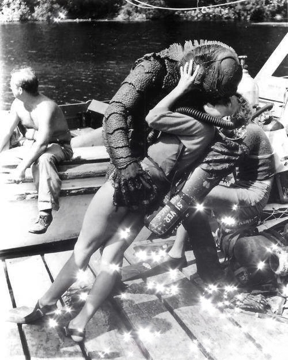 Their attraction was certainly unforeseen and some would say scandalous, but as a long dead poet once wrote, “Love refuses to be denied”. Carlotta was a chorus line performing scuba diver for the JD Sleshinger Underwater Circus, and Raul was the spawn of some strange genetic mutation due to radiation spillage, Hawaiian toxic waste and a hyper-sexually active Komodo dragon that was washed off the Galapagos Islands during a typhoon and ended up in some backwater in Quinsy, Florida. Anyway, Raul and Carlotta were destined to meet. While performing a particularly sensuous underwater ballet set to the music of Herb Alpert and the Tijuana Brass, Raul swam up and joined Loretta in dance. The audience that day reported that the performance lasted for only twelve minutes but afterward the two pledged their undying devotion to each other and rented a modest, two-bedroom house in Pensacola, Florida where they raised three, well balanced kids and had the most admired swimming pool in the neighborhood. Yes, cherished friends, “Love refuses to be denied”, doesn’t it?