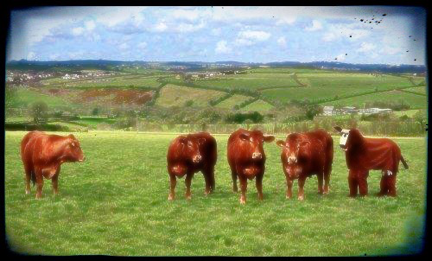 Pity poor Quinton Fisk. The promising 20-something was in the final semester of studying for his doctorate in B.S. (Bovinian Socialization) and was happily conducting a case study in Hankiwad, Oregon. Not only was his degree within reach, Mr. Fisk had a reality show in early development with Animal Planet because he had successfully ingratiated himself into a small herd of heifers. All was going well until he started schmoozing with Petunia. Turns out Petunia had an advanced case of glandulae (mammary gland) envoy and when she saw the almost cosmetically perfect protuberances on Quinton, she flew into a snot spewing rage. Mere moments after this picture was taken by Quinton’s camera crew, Petunia reared up onto her hind legs and mercilessly pummeled poor Quinton with her deadly fore hooves. To this day, Quinton is resting comfortably in a medicated coma at Our Blessed Saint Mariah of Free Range Beef where, it is said, that he mutters in his sleep, “The horror, the udder horror!”